First, thanks to everybody who responded to this questionnaire.  I wanted to get a picture of what people are thinking across the wider arts sector,   a sense of what they think needs to be done, a sense of what it’s like “out there”.  So let’s get to it.

I said I’d post an initial analysis this Friday (sorry for being late). It’s important that we start with a couple of caveats.

With these warnings in mind we can look at the response.

The first question was:

The most obvious  conclusion to draw from this is that both the current funding levels and methods  do not reach 74% of the people working in the sector, and that an additional 25% of people have an unstable relationship with funding via the existing agencies.  Another way of saying this is that the existing funding, in terms of amounts, agencies and delivery methods, is failing 74% of the arts sector ALL the time, and not providing continuity or stability for another 25%.

There are interesting  similarities between these findings and the picture presented in  the Indecon Report (2010/2011).

The Indecon Report, commissioned by the Arts Council to measure the economic impact of the Arts sector, is out of date (the data is over 12 years old), but no comparable study has been commissioned since, so it’s all we have. According to Indecon the Gross Value Added (Direct, Indirect and Induced impact) of the Wider Arts Sector was €1.553 billion, but the  Gross Value Added of the Arts Council Funded Clients  was estimated at €112.38 million. –  or 7.24% of the  total GVA.  Arts Council funded clients employed 809 (6%) , and the Wider Arts Sector employed an additional 12,521 (94%). The wider arts sector generated tax returns of  €306.8 million in direct and indirect tax of which €41.1 million (13.4%) is returned by Arts Council clients.  I have questions about the methodology and data presentation in the Indecon report (I think it undervalues the funded sector), but it is, shamefully, the only such report we have.

With this in mind, the story that emerges from looking at these two sets of figures (our questionnaire and the Indecon report)  raises a lot of questions. If we assume that the 74% of people who find access to funding an ongoing problem in their life and careers live and work in the Wider Arts Sector, then it would seem that their work is creating  €1billion in Gross Value Added. The question is why are they not  benefiting from the wealth they create in any way? This suggests a serious structural failure.

We can also suggest, looking at these two sets of figures, that while The Arts Council – and the Local Authority Arts Offices – are valuable,  they are failing to support in any practical, ongoing way the 74% of arts workers, who appear to be creating the lions share of the wealth in the wider Arts sector.  Purely in terms of value for money, why has no way been found, or no system designed,  to invest in, support and stimulate that 74% ? Why are they less of a policy priority than the funded sector?

It would seem that the way the arts sector is currently funded (how we get money into the sector, and who we get it to) is in need of serious reform. This would appear to be  the first, essential policy step, before we start talking about increasing existing funding amounts through existing channels.

The second question was, “If you could change three things about the conditions under which you work tomorrow, what would they be?”.

It will take a couple of weeks to analyse and collate the responses to this  in detail. However, the first thing I did was put all the responses into a word cloud generator, to get a sense of recurring themes and concerns. This is the first result: 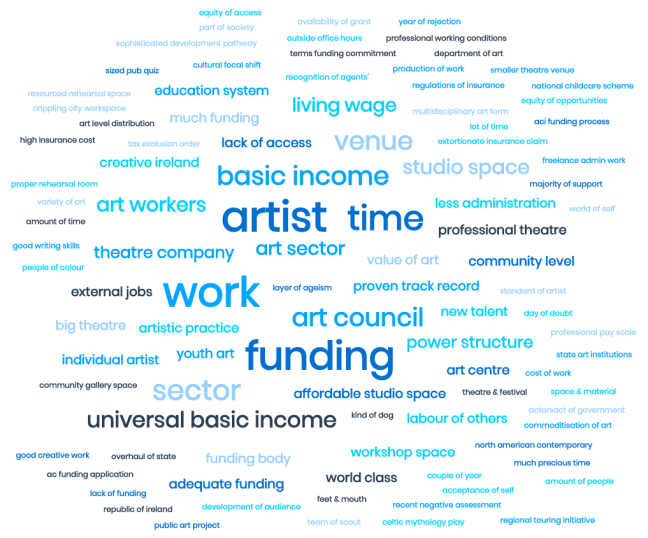 Now, a lot of work needs to be done on this data, as a wordcloud simply demonstrates the frequency of words and phrases.  However, if we remove the words “artist” and “funding” (we can take them as a given) and see what emerges we  see that the largest concern is around “work” and the related ideas of “basic income”,  and “living wage”.

This seems reasonable, as I  read many comments along the lines of “even €200 a week would make this bearable”.   This weight of concern with “work”, “basic income” and “living wage” suggests that, in policy terms, what we have here is not an “arts funding” problem but a labour problem around terms and conditions, false self-employment and precarity.

Self employment works when you can capture a significant portion of the wealth you create and exceed all the costs incurred in creating that wealth.  Think about the hourly rate of GPs, solicitors, electricians etc.  However, when you don’t have direct access to the wealth you create we have a structural problem. For example, no single worker in Google creates all of Google’s massive wealth – but they do create a part of it, and they are rewarded accordingly. They are employed.

If the state acknowledges – as it does in several reports – that arts and culture contribute to foreign direct investment, tourism etc.,  and if it is apparent that the wealth created by the arts sector cannot be captured by the individual artist at the point of production or sale, then a mechanism must be put in place to recycle an equitable portion of that wealth back to the primary producers of it. Taxation and direct state funding is one way of recycling, but it is clearly not working as 74% of our sample are not benefiting from it.

This is the second major policy issue: put bluntly, either the state (not one of its agencies)  ensures that artists get an equitable share of the wealth they create, or the state continues to engage in a sleight of hand, whereby they benefit from the ongoing labour of artists but refuse to employ or pay them either directly or indirectly. Which is of course an extremely exploitative relationship.

As a final first response to the data,  issues of income, a place to live, a place to work, and an effective market to sell in are priorities. But these are not “arts funding issues”.  A place to live and a place to work is a housing, rent control and public space issue that affects the entire country; levels of income are at the very least a welfare issue that affects everybody, and should be considered in this situation a labour relations issue; the lack of a market (people unable to afford to engage in art) is related to the decline of disposable income, wage stagnation,  and the absence of the wider humanities in our education system. Simply increasing funding through a single agency will not address any of these issues (and could make the situation worse).

So a brief summary of possible actions based on a primary reading of the data:

A more detailed analysis will follow next week. Thanks again.

This site uses Akismet to reduce spam. Learn how your comment data is processed.